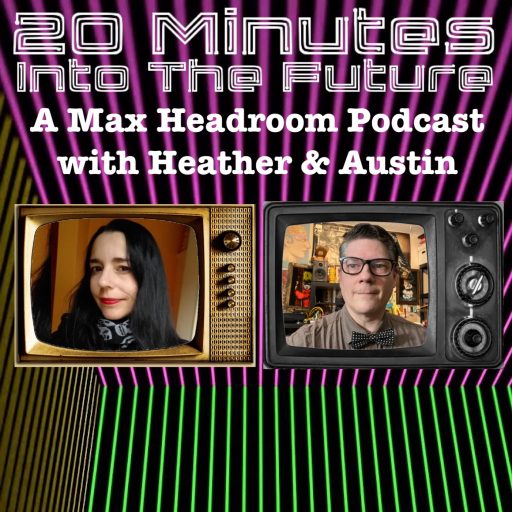 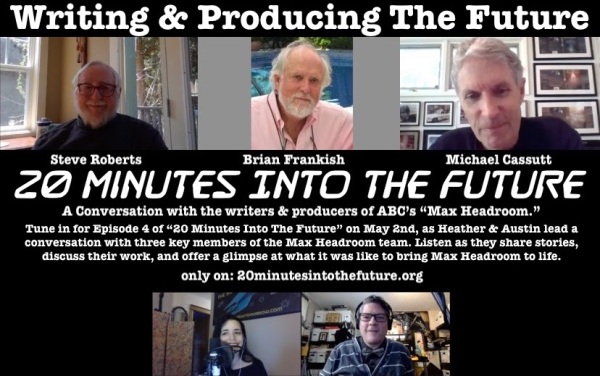 We’ll cut to the chase: we are announcing a special episode of our podcast, where we get to speak with Steve Roberts, Brian Frankish and Michael Cassutt, three of the creators behind a little show that is near and dear to the hosts of this podcast.

There is so much talent crammed into this panel of Hollywood Luminaries that it is a shame, really, that we only get them for an hour, and even worse, that they are only discussing the program that they all have in common: something that lived, and still does, at some point 20 Minutes Into The Future…

“Max Headroom” was a short-lived science fiction program with a dark sense of humor and a wicked take on what the future might be like. And, in a very strange turn of events, much of this future happened to become the world we now live in. This ironic twist has not only led to making the dark comedy of this program even darker, but has led to a new podcast, “20 Minutes Into The Future,” where Heather & Austin (two radio nerds) review and discuss these ironies. Now, they get to aim this conversation directly at the creators of the program.

Writer, Director and Producer Steve Roberts, best known for writing “Max Headroom,” and “Hercules,” as well as developing the Canadian program, “Redwall,” is a charming English gentleman with a wonderful laugh and a very sardonic view of the horrors that technology can offer.

Novelist, writer and producer Michael Cassutt produced shows like “Z-Nation,” “Strange Luck,” “Eerie, Indiana” and “The Twilight Zone,” as well a having written dozens of scripts for a number of shows. He also worked closely with Steve Roberts on “Max Headroom,” and is a bit of a NASA nerd in his spare time.

Producer and Director Brian Frankish, who worked on films like “Strange Brew,” “The Last Starfighter,” “The Fugitive,” and “The Crazies,” and relevant to this particular conversation, was the producer on “Max Headroom,” that helped bring Steve & Michael’s stories to the small screen.

In this panel conversation facilitated via digital communication tools, three of the people who envisioned the future that we all now live in will reminisce, and discuss what it was like to develop this vision. Join us for an hour-long discussion about what it was like to work in the television trenches of the late ’80’s, and listen in to stories about bucking the system and working within it.

“Max Headroom,” was anti-television, anti-corporate power, anti-advertising, and anti-globalism, and yet, was produced by some insightful and adept members of the Hollywood community, who were not afraid to thumb their noses at the establishment. Now, this is our chance to introduce this brand of nose-thumbing to a new generation.